Liria T'Remi is an asari mercenary, and former Lieutenant in the Systems Alliance Navy. Leaving the Alliance under questionable circumstances -- which saw her later arrest and penal work during the Systems Alliance-Vies War of 2190 -- she then helped defeat the terrorists of Inferno Novaris, working with Aleena T'Saris, who offered her work with Black Nova.

She posts on CDN as Liria.

Liria, like most asari, looks younger than she actually is. She is about 5'9", 145 lbs, and has light blue skin, transitioning to a light teal on her crests, as well as slightly darker markings on her neck, and face. While far less visible under most circumstances, she also has similar markings on her chest, back, and abdomen. She has pale blue eyes, which in certain lighting conditions can appear white.

Despite her young age, she has a few scars. Of these, the most notable is the remnants of a bullet wound in her left arm, from before she'd gotten her life back together. She also has a series of barely visible scars on her left hand, and a normally hidden scar on her right leg, that she got during the evacuation of the Perth during the fighting over Earth at the end of the Reaper War.

Born on the 17th of April, 2126, in Serrice, Thessia, Liria is the only child of a former asari commando, Faena T'Remi, and a turian engineer, Octis Lenictus. She grew up on Thessia before moving to Earth at the age of 32, due to her father dying in the First Contact War, and her mother subsequently marrying a human marine. She has spent her fair amount of time on Earth, and regards it to be a second home of sorts, due to its environmental familiarity to Thessia. As a result, she knows a lot about human customs, but quite a few things still perplex her.

When the Reaper War broke out, she was on Earth, visiting her stepfather after finished studying engineering at the University of Serrice, having graduated only a few months beforehand. Managing to reach one of the evacuation shuttles that got past the Reapers, she was evacuated to the Citadel, where she met her stepbrother again. After several days, she decided to enlist in the Alliance -- as she could see it, the Republics weren't acting fast enough, and she had seen what the Reapers were capable of first-hand. However, the recruitment officer told her to get a job at the Purgatory bar instead.

Outraged at this response, her brother had the recruitment officer, a Service Chief, assigned to a frigate making small, fast attacks on Reaper forces. This was done without her knowledge, and she had not asked for anything like it to happen. When she found out, she was furious, but there were more important things to deal with -- like a galaxy at war.

Following the debacle with the recruitment officer, she managed to successfully enlist in the Alliance, which some officers objected to at the time. After receiving emergency military training, she was assigned to the SSV Perth, where she served under her brother, until the end of the war.

During the battle of Earth, the Perth was one of the many ships in Sword fleet. During the subsequent naval action, the Perth was hit by a glancing blow from the main gun of a Reaper. Suffering critical damage, with hull breaches and severe system damage, the crew abandoned the ship. The escape pod Liria was on crashed on Earth, on the eastern seaboard of the UNAS - where it likely remains. Unfortunately, the pod came down in close proximity to a Reaper patrol, along with a few other pods from the Perth. Fleeing from a Banshee that was a part of the patrol, Liria took refuge in the remains of a house, managing to squeeze into one corner of a packed garage. There, she got her only up-close look at a Reaper, before the combined fire from a squad of marines took it down. She was still there when the blue flash swept over them.

Post war, with the creation of the 1st Salvage Flotilla, she was assigned to the SSV Brunel, a re-purposed freighter, as a technical adviser, and held no official position on the ships crew. Due to being an engineer with a university qualification, she did hold the Alliance rank of First Lieutenant.

In 2189, she deserted from the Alliance and fled to Omega, finding work as a freelance mercenary, which she worked as for several months.

In early 2190, while on a date with her then-girlfriend, Sophie Luna, she was arrested by Alliance Marines led by Natalie King. Ultimately let off lighter than normal, due to the circumstances surrounding her desertion, she moved in with Sophie to her home in Fredericksburg, UNAS.

The relationship was not to last, however. Due to unforeseen events, they both agreed to end the relationship. Despite the manner in which the relationship ended, Liria wound up spending several days crying over the loss of her girlfriend, but she eventually got over it, vowing to never forget the time they spent together.

The main reason she got let off lightly would become apparent not long afterwards -- as part of her sentence, she took part in an Alliance-backed operation to rescue two captured Marines from Viesi forces. Unfortunately, due to several hiccups, war broke out anyway, despite the efforts of those that were present at the time. See: Systems Alliance-Vies War of 2190.

Months later, she was picked by Mekan of Omega (who was also on that initial mission) to join his team as they went to Avakk III. She made it back.

Recently, she acquired a new weapon -- a batarian-made Kishock Harpoon Launcher, salvaged from an abandoned mansion in a seemingly forgotten region of space.

Liria has few scruples regarding sex, which has made itself obvious several times over the course of her time on CDN. As it stands, she has a list of things that she won't do at all, and those things are up to her prospective partners to find out.

Jil'Korah is nasty about it here. 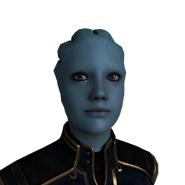 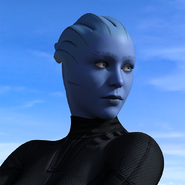 Omega: Liria is on Omega, and acting oddly. What's going on?

An Announcement: It transpires that Liria has left the Systems Alliance Navy. Nat is incredulous. Aleksanders is scornful and amused. Isadore is supportive, at least.

The Long Arm: Deserting and shooting people has consequences.

Sleepless In...: Liria visits a bar on Erinle; it results in her being tased and thrown out by Nikolai Aleksanders.

Drink Deep, Drown Your Sorrows: Liria shares a drink with Tomaj Isadore. She also complains at one point about the Erinle incident.

Cards at '86: A card game at the Silversun Strip, for a group of CDN regulars.

Liria is arrested: On Eden Prime, Liria is apprehended by Nat (Natalie King), and goes quietly.

Making the News: The details reach CDN. And Nat posts her own account.

Down to Business: As part of Liria's sentence, she takes part in an Alliance-backed operation to rescue two captured Marines from Viesi forces.

I Hate You All: CDN prepares itself for the fallout from the previous mission. Much recrimination is involved.

Please Donate: A contrite Liria is now trying to raise money to get Nat a cloned replacement arm - although Nat being off to fight the new war in the Caleston Rift means the timing is not the best.

I Need A Shoulder To Cry On: Having broken up with Dr. Luna, Liria desires some comfort. Unfortunately, this is CDN.

The Lamentation of Man: On Cartagena, Liria meets with Cerastes, Deadbeat (Prax) and Ket'Etal.

Back In Black: Liria joins the trio of Mekan, Dass and Wash as they head for the new warzone on Avakk III.

Violence of Action: Liria and the crew hit a Viesi militia outpost.

It's My Party And I'll Cry If I Want To: A returning Aneeda D'Veyra is in need of a friend. Relationships and ageing are discussed.

The Stench of Betrayal, Part One: Drama within Black Nova.

The Stench of Betrayal, Part Two

How Many Biotics?: Black Nova and Hamno head toward a confrontation.

Long Night: On Illium, at a public function, the Hamno crisis come to a head.