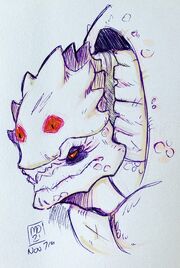 Now Nameless, this krogan was formerly named Br'uuj by his batarian masters. His former life has left many scars, but he began a new one after arriving on Tuchanka for the first time in his life. While his past has left him guarded and prone to aggressive bravado over thoughtful actions, underneath the mask is a curious krogan.

He is at home more in the void of space or the wilderness than what he would consider 'society'. His life as a gladiator, runaway, and pirate has left him with great martial skill, but little experience with anything else. He is deeply curious about the krogan people, and the homeworld. But his lack of exposure to them left him too afraid to attempt arriving on the planet until forced to by losing other options. Nameless is currently wandering Tuchanka, to learn about it, his people, and himself. In doing so, he hopes to arrive at a new understanding of who and what he is.

In an attempt to connect with others he is trying to keep a brief journal of his travels on the CDN forums themselves.

Hatched in 1941 on Khar'shan, in the nation of M’itgah, in the city of G’thera. An albino, slave caste krogan, destined for gladiatorial combat until he died. A viable egg poached and delivered by slavers.

Named Br'uuj, he endured decades of horrid conditions and fights as a youth in training to one day be sold to a proper fighting house. He eventually became a stable favorite, before being sold to the Kar’Azahk family, wealthy and powerful gladiatorial owners.

He was entered into the G’Thera colosseum properly and quickly gathered a kill count, and a reputation for brutality. He was a gladiator for 150 years, being passed down through the family as they reaped wealth from his victories. He became known as the Cannibal of G’Thera as he often ate parts of his opponents in the arena. Attempts at breeding him with other krogan slaves were made; it is unknown if any were successful.

The last of the Kar'Azahk family to own him, Tashek, actually became convinced that Br’uuj, such an important aspect of their gladiatorial success and wealth, was actually her Se'gash. She kept him considerably better than his previous owners and even taught him (from inside his cage, of course) some basic reading, writing, and technology.

He found himself in the possession of a rudimentary omnitool, compliments of another gladiator's arm, and was able to in small doses teach himself more and more over the years leading up to his freedom. Tashek, in defiance of her family and a testament to her superstitions, arranged to have him placed within the mausoleum after her death, to protect her in the afterlife. Her son, who would most likely have been the next one to inherit Br’uuj, intervened and hired thugs to intercept the procession and steal the krogan.

Mistakes were made. Br’uuj was released and murdered 22 people on his rampage through the ceremony. He ripped the eyes from Tashek’s corpse, which he later preserved and keeps around his neck to this day.

Stowing away on an outbound ship, he killed the crew after they left Khar’shan. Trial and error (and autopilot) saw him pilot the ship to Omega where he sold it. He remained on Omega for 30 years, from 2091 when he escaped, to 2121. It is unclear how many murders in the stations underbelly he is responsible for.

In 2121 he gathered a small crew of mostly vorcha, and a few intelligent sailors who knew how to fly and navigate, and stole a ship from the docks, leaving for the Nemean Abyss and hitting weak targets along the way. He has been a pirate in the Abyss ever since, gaining  power for 72 years and leads the Abyssal Maw pirates, which varied in strength over the decades.

In 2196 the emergence of the Maw's Dominated, a faction of former-Blood Pack armies, resulted in the destruction of Br'uuj's flagship, Ta'ruan's Net. His Abyssal Maws suffered extreme losses and a number of defections when offered the choice to submit or die.

Captained the Ta’ruan’s Net- a Thar'Van Class Assault Frigate with two shuttles: Destroyed by the Maw's Dominated in 2196

An obsession with collecting eyes. Specifically batarian, but also in general.

Br’uuj and the Abyssal Maws held docks at Tortuga and Cartagena. Without their ship, and with numbers depleted, it is unknown if they'll continue to do so. Or if his Abyssal Maws will continue at all.

When joining the Cerberus Daily News forum, he believed that he will not enter the afterlife due to not having four eyes. Collects a multitude of eyes, believing that eventually he will have enough to essentially break into the batarian afterlife and hunt down the Kar'Azahk family in death, using Tashek’s eyes as the key, and the accumulated ‘souls’ of his eye hoard as the fuel. He will then hunt and kill them, ad nauseum, for all eternity, turning their paradise into unending torture. His throne room aboard Ta'ruan’s Net was lined with shelves of these jarred eyes, making audiences with him unsettling.

After the destruction of the Ta'ruan's Net and therefore his collection of eyes, it is unclear what remains of his goals. With exposure to a larger collection of views and people than at any other point in his life, Br'uuj is conflicted. At his young age, is wanting revenge, and crashing the batarian afterlife really the only goal he wants?

Upon losing everything he had gathered, Br'uuj finally made it to Tuchanka, giving up what was left of his Abyssal Maws as well as his name.

Threads and Posts of Note

First Time For Everything: A glimpse at young Br'uuj in the arena.

Cure: So, apparently you have to travel to Tuchanka to be "uncursed"?

Whose Is Bigger?: A new arrival shows off his ship... which is the same class as Br'uuj's own.

Dating!: Br'uuj wins a romantic evening with another familiar krogan...

I Wish To Go To Tuchanka: Br'uuj longs for the racial homeland -- but how to get there?

Evaluations: We get to see the ship, as several other CDN regulars take passage.

Double Tap: A job on Omega, with a number of other CDN users.

A Reading In The Flame: A batarian mystic provides insight. A back-and-forth with Vuk is also of note.

Maw-Dern Warfare: A routine strike on an easy target turns bad for the Abyssal Maws as the Dominated arrive on the scene

Self (and other kinds of) Exploration: Br'uuj and his surviving Abyssal Maws arrive on Tuchanka. Br'uuj sends them away and cuts ties with his past, including his name. The discovery of Tuchanka begins for the young Nameless.

journal for Tuchanka: Nameless decides to post notes from his quest.