View source
"People can usually be so much more if they put their minds to it, sometimes they just need a helping hand, other times a kick up the ass. The first one is usually more comfortable for everyone though."

Technical_Intent is the moniker by which Fenir'Drow goes by on the site of CDN, a skilled hacker and a survivor of Omega both before and during the war, Fenir is currently the joint head of a small but growing mercenary group and despite a rather troubled past seems to be heading towards a bright future. He joined the forums at the urging of his partner and has become a rather proactive member since signing up, he uses the forum as a way to de-stress and socialize with people, given that his work leaves him with increasingly little time.

Fenir's physical appearance is generally not something most people see beyond the occasional outline of his face beneath the helmet, on an occasional day he decides to have his visor relatively depolarized they may see a little more of his face, but that tends to be fairly rare. He has lavender (pale purple) skin and silvery eyes, coupled with dark hair and darker purple natural markings across his body, His face is somewhat pretty and is usually smiling or pouting in irritation, depending on the company he is keeping at the time.

Fenir is toned and slender, with his thighs generally being the thickest part of his body, he is a little above average height for a quarian, however this still leaves him shorter than the average height for many of the other races in the galaxy, so he is often a little shorter than many of the people he encounters. His suit tends to maintain a practical and minimalistic style to its look, and while the material is changed around on a regular basis, the colours often remain similar, even if the patterns vary a bit. Under the suit he also has a rather extensive collection of scars across his back and shoulders, a memento left by an old enemy who went to a great deal of effort to torture him without killing him quickly.

Overall it is safe to say that Fenir tends to look fairly unintimidating in his appearance, something his positive and friendly manner tends to emphasize to most people. It can lead to some people underestimating him to a certain degree, but he feels that ultimately on Omega that can often be a good thing, it just means he can prove them wrong.

Fenir tends to keep his background fairly private and is not too keen to tell most people about where he came from and how he ended up on Omega, not because of any shady dealings or actions he is ashamed of, but because he is ultimately a rather private person when it comes to himself. Much of his childhood was unremarkable, his parents members of the fleet and his upbringing was something that most quarians could probably expect; developing technical skills, helping aboard his birth ship the Sharok and developing a keen interest in engineering but also especially hacking and computer technology. He was a fairly introverted child with a small circle of friends and a lot of time spent alone reading or watching films, he developed a keen interest in the wider galaxy as a result of this, having read and watched a great deal about other cultures in his spare time.

When his pilgrimage came about he ventured out into the galaxy and found it to be a place that was not only beautiful, but terrible as well, with dangers in every corner and a great many people who felt inclined to judge him simply for being of a certain species. It also emphasized to him how much the quarians had lost and how precarious a position the fleet was in; something that would come back to haunt him later. On his pilgrimage however, he also met a lot of good people, and got ever more invested in seeing more of the galaxy and encountering new cultures.

When he eventually returned to the fleet he found himself struggling to re-adapt to the life he had earned on the Flotilla, every helmeted face was a reminder of how they were trapped, every ships corridor with barely any space a reminder that this could be his life for the rest of his life. He was increasingly frustrated with the Fleet's (and especially his parent's) tendency to blame every other race for their problems and isolate themselves away. Suffice to say he felt that there were better ways to do things, and after a confrontation with his parents over that an his own sense of failing to belong, he left the fleet for good, determined to strike out on his own.

He ended up on Omega and for the next few years struggled to make ends meet, eventually meeting Neralya Ral'serah and after numerous adventures and freelancing experiences they formed the group that would become the Sahrvi Blades in response to the Cerberus occupation of Omega. Much of what happened on Omega is not something that Fenir tends to make public to everyone, since it is complex and in many cases unpleasant thing to recall, however suffice to say that freedom from the fleet is not always the same as freedom to do exactly what you want and Omega is not an easy place to live when you start at the bottom of the pile. 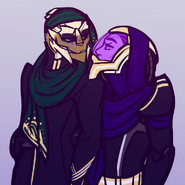 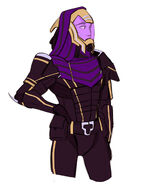